Haven’t updated in awhile, at least not publicly.  I’ve written some BRILLIANT stuff in my head, too bad you missed it.  Anyway, here I am, back at the keyboard on a hot SoCal night in August ready to do the deed.

First, the Gallery heading has been fixed (thanks, Sam), so I now have a literate home page.  In a way I’m kind of sad to say goodbye to the old misspelling.  It was a sweet little misfit of a word, lacking pretension and polish.  I hope it is out there somewhere holding fort for all the other wrong words and typos that will, I’m sure, come out of this little site.  Be brave, Gallary, you will have plenty of company soon!

Second, I mentioned that I was going to write my feelings about Chainletter, which is still up as a show but really just a record of the event.  Well, I’m not going to do that.  Enough has been said, and I’m sure after the deinstall I will have a few choice words.  I am going to include a picture of my piece, Chinatown, which is among the good, the bad, and the ugly of the F1 space.  It kind of makes me sad for it to be there, like I sent my child off to a rather boisterous and unruly summer camp.   (In case anyone interested enough to be seeing this doesn’t know, Chinatown is the tall striped piece.  I’m the tired looking man in front.) 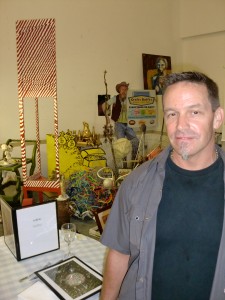 me with Chinatown in the F1 space at Chainletter

Thats about it for now.  I have more to write about but it is geting late, and as the above picture shows I need my beauty sleep!

If you enjoyed this article, please consider sharing it!